With Halloween just around the corner it's time to start rolling out the Undead army! This week will see the release off the foot soldier sets of swords, spears, and archers accompanied by the Wraithlords for some heavy hitting support.
One Book Shelf 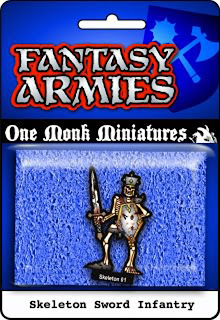 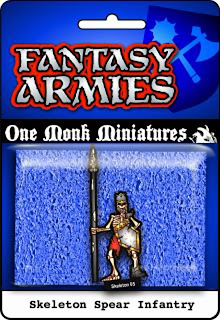 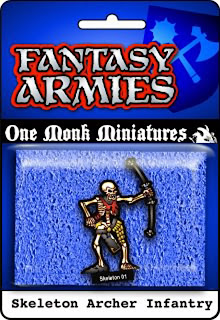 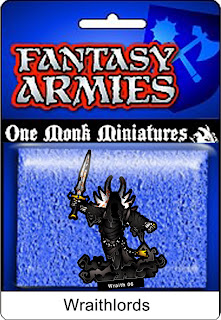 Not a new model, in fact quite an old paper model, butthe first Jim Hartman model that I ever built and the the piece that made me say, "Hey, this looks like fun!" The first piece I built was a free download of an English country home from Fiddler's Green that I used for 1/72nd scale WW2 miniature battles. They're great folks over there, pop in and have a look;
http://www.fiddlersgreen.net/

It was in searching for more paper models that I came across this beauty years ago and I am very happy to restore it to the downloads section. Check it out!
http://www.onemonk.com/Home.html 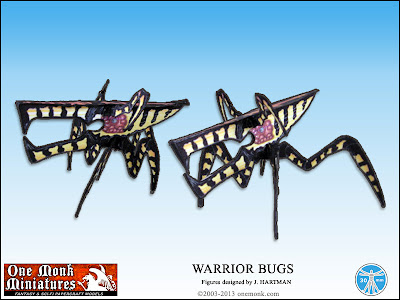 By the pricking of my thumb...

...something wicked this way comes...because it's October and that means more undead and more monsters! This week from the One Monk Miniatures classic vault we have Witches and Bats, Zombie Villagers, Skeleton Soldiers, and Reptilian Monsters just for good measure.
One Book Shelf

I've forgotten what new things I've added to the One Monk.com downloads section but I know I added a few things, just jump to the bottom of the section and have a look. :)
www.onemonk.com 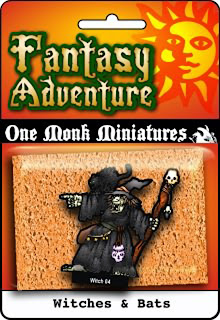 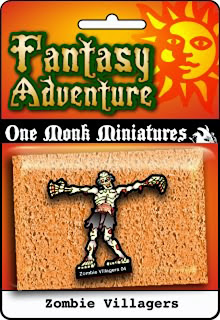 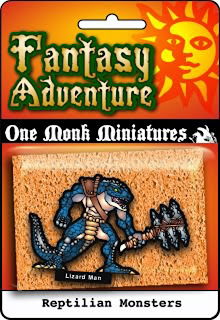 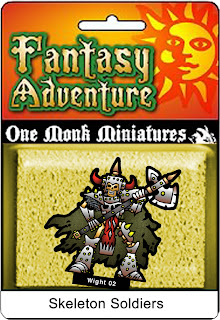 I know these aren't necessarily Halloween themed sets, buut everybody needs more monsters, particularly when they're Kobolds, Ogres, Golems, and a side of Berserkers. Check into my shop at One Book Shelf to pick them up;
http://rpg.drivethrustuff.com/index.php?manufacturers_id=4300

More new-old kits up at One Monk.com, I'll keep adding things to the Downloads page as they get unearthed or revamped. Let me know if there's something specific you're looking for that I haven't reloaded yet. http://onemonk.com/Home.html

One of the questions I've been getting about the future is, "Are you just going to re-release all of the old stuff and then call it a day?" Well, I wasn't quite asked like that, but the answer is no, there is more to come. After all of the old kits are back on-line I will be releasing what I'm calling expansions and completions for the different lines. Particularly for the Elf army; they'll be getting cavalry and light infantry expansions and some forest creature helpers. I want the Elven Alliance to be able to go toe-to-toe with the Undead Horde on the tabletop. At some point next year the Orcs and Goblins will be getting some reinforcements, the Skelebots will be getting some heavier support in January, the Chimera Hybrids will be getting their heavy supports in December, next spring will also see expansions for the Terra Force Marines and Elite Marines with special and heavy weapons troops, and more post-apocalyptic sets for some Wasteland warfare. My personal focus is on sci-fi so the releases are going to be weighted heavier in that direction, my apologies to the Fantasy mini fans out there. Mayhem in Paper will also continue to produce Steamtanks and soon some scenery kits.
Whew!

Sound ambitious? I'd certainly hope so. :) I've gotten a great deal of the maintenance and infrastructure of the new organization completed so I'm able to devote more time to the art side of the business now, which feels great! 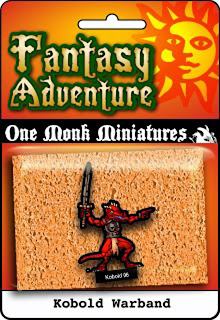 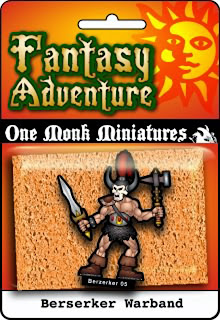 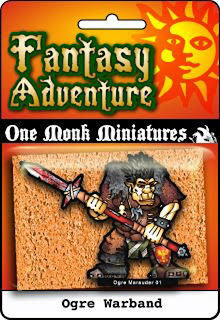 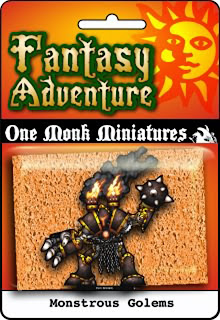 Dawn: Bump of the Occulites

This is a very interesting and innovative board game being produced by some good people who are really close to one of their major funding goals. I highly recommend giving it a look and possibly pledging for a copy.
http://www.kickstarter.com/projects/2002188924/dawn-rise-of-the-occulites-0 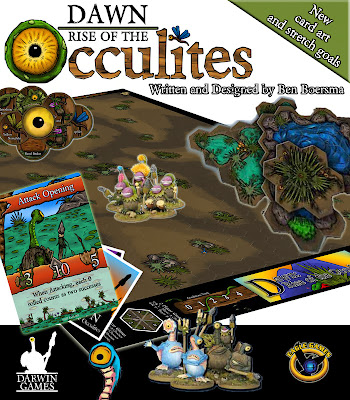 The Lich girl along with her Shroom Brute henchmen are leading an army of rats to your town, get them now in the Cardboard warriors forum Hoard #108!
Forum Hoard #108 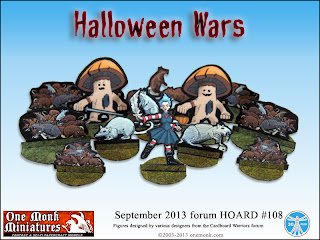 The Cardboard Warriors Forum Hoard #109 - Mutant Menace, is going on through the month of October. Get inspired, grow an extra tentacle or a fourth eye and come on over to the forum to check out the different designers offerings or to offer up some of your own artistic madness. :)
Forum Hoard #109 - Mutant Menace
0 comments
Email ThisBlogThis!Share to TwitterShare to FacebookShare to Pinterest

March of the Undead

Halloween's coming up so it's time to bring out the Undead! There will be all sorts of undead and monsters being released all month long to help you get in the spirit of the season. :)

onemonk.com is getting closer to completion; the majority of the free downloads from the skilled hand of Jim Hartman and the Forum Hoards from 2008-212 are up. Be sure to check them out and if you see some issue on the site pop in at the forum and let me know about it;
http://cardboard-warriors.proboards.com/thread/5175/monk-dot-com-re-released 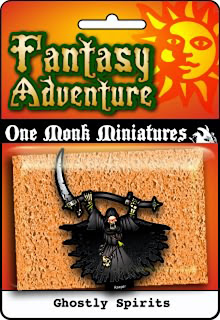 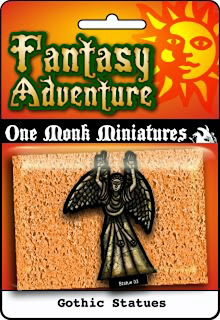 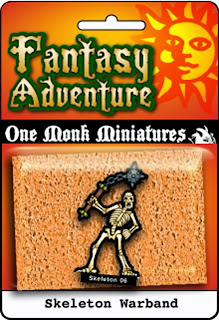 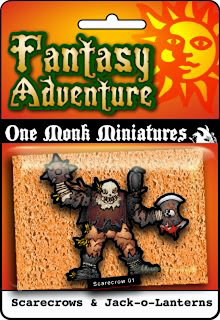 What I learned at Senshi-Con

Home from the convention, had a great time, learned a lot of lessons, didn't sell any minis. Did sell a sampan and two tanks though. Chuck Huber (does lots of voice work in anime) was going to buy a page of Buzzers but I comped him instead as he was one of the guests of honor and we'd been having a nice chat. My son showed up two minutes later and it turns out  Chuck Huber is one of his favorite people, he was devastated at not getting to meet him. I wasn't terribly surprised at my lack of sales, it was an "exposure event" for me, at least that's how I'm classifying it.

When I went two years ago the "Artists Alley" was only two sketch artists doing different things and Winter Powell premiering her new Bloodcross graphic novel. This year there were seven sketch artists, mostly doing similar things, Brett Uher premiering his Daemonology graphic novel, Katie Tiedrich as a guest speaker selling her Awkward Zombie tpb and doing sketch work, and Winter Powell selling t-shirts and prints from Bloodcross and doing sketch work. I had to kick and cajole Winter into coming this year, she had dropped her publisher and was despairing a bit. I and others there helped her get set up and she felt a lot better once she had pencil and paper in front of her. There were also a half dozen vendors selling anime and manga paraphenalia for top dollar, and they did all right. It was the small artists that I felt bad for; too much similar competition in a small market.

Cd's would have sold well with this crowd, definitely on the agenda for the next one, they will work well with the printed catalogs too.

Things I learned-
-Need a banner to improve visibility
-Battery operated led lights for the display case for better lighting. The convention hall was a bit dim.
-Pop culture hook is great for stopping passerby. The Eagle V model got lots of love and got people to stop and look at everything else.

Some notable quotes;
"My dad would love this"-young girls
"Are these collectable?" - many people. And the variation, "I'm sorry, I don't collect those."
"I'm not ready to get into an expensive hobby."-some guy in a Furry outfit missing his head, which I'm pretty sure is a violation of the Furry Code of Conduct.
"Are these for World of Warcraft?"- many times
"They're cool but what would I do with them?"
"They kind of look like stained glass."
"It's all geeks and nerds here!" to which I replied, "Then I'm in good company."
"These are old-school: back before metal or plastic minis everything was like this."-Link explaining my booth to Zelda
"These are all from games (the steamtanks), I just don't remember what right now." -some dude trying to sound knowledgeable in front of his buddy.
"If I have five dollars left later maybe I'll buy something."-some guy who kept coming back
"Are these for a game?" / " What game are these for?"
(overheard) "I wonder what else I can spend money on?" Oh miss? I have an idea!

I should develop a game for the steamtanks, would make for a fun demo if nothing else. 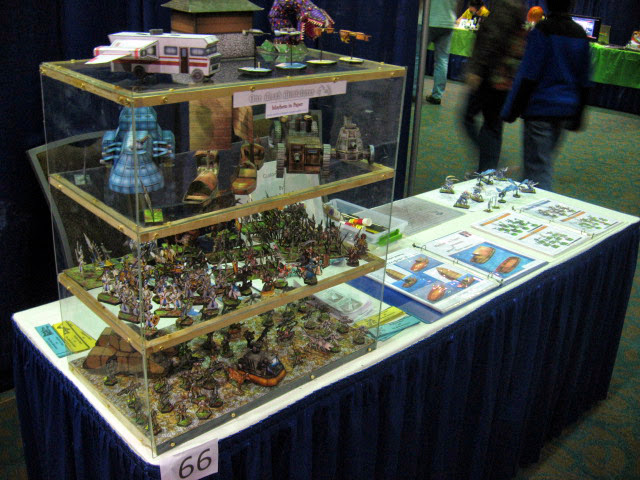